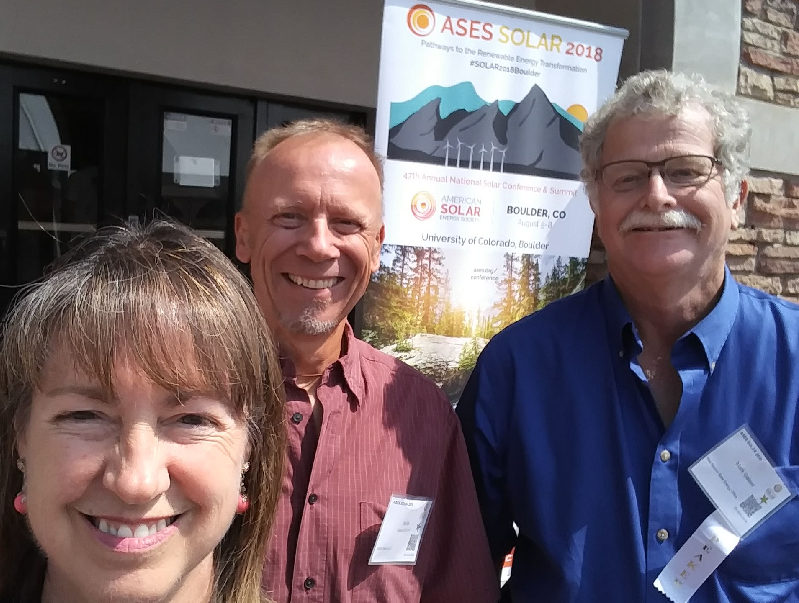 The SOLAR 2018 national conference for NMSEA happened August 6-8. Our parent organization, the American Solar Energy Association or ASES, held this year’s educational, inspirational and networking conference in Boulder, CO. Our president, Athena, and several New Mexicans shone brightly as either organizers, volunteers and/or presenters. Join now, and plan on going to Minneapolis in 2019. We should make it an electric vehicle caravan! 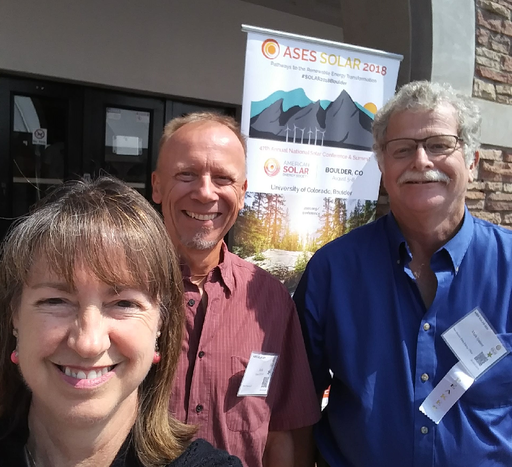 Volunteering makes it happen!
Karlis (center) oversaw the volunteers for the entire conference. Athena and Mark (both from NM) were a couple who presented and helped at Karlis' direction. 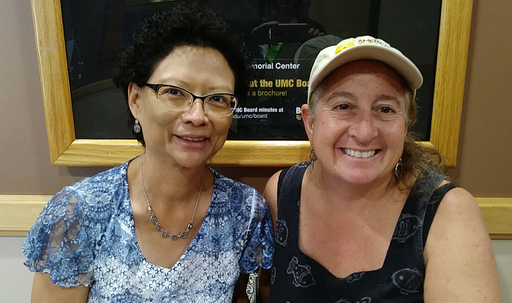 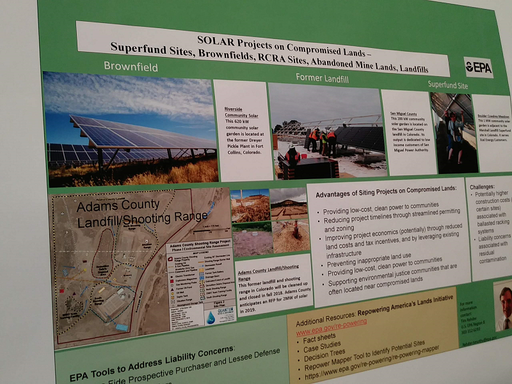 Solution Providing Posters
Boots on the ground solutions in our transition to a true clean energy future. This one speaks volumes to the potential for the San Juan area. 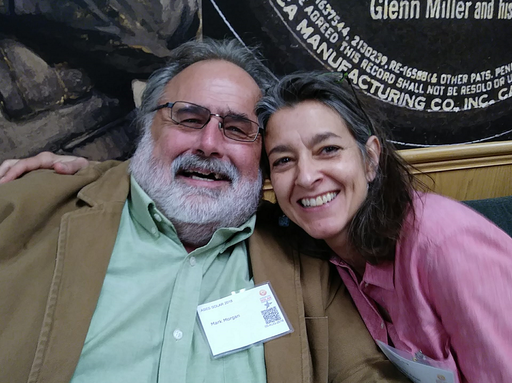 Networking and leadership growth
Friends Mark (Minnesota) and Claudia (New Mexico) reconnected and provided inspiring leadership training for the chapter leaders and renewed their spirits. How else are we going to lead? 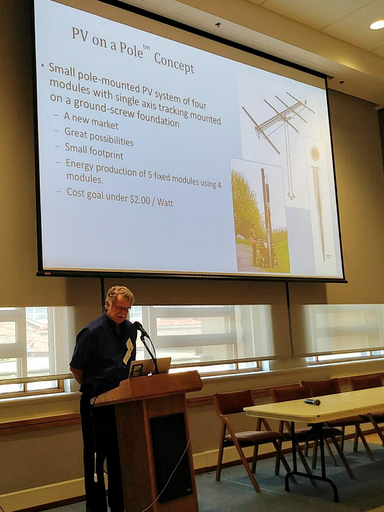 Informed Presentations
One of several dozen presentations on the different "Pathways to the Renewable Energy Transformation." 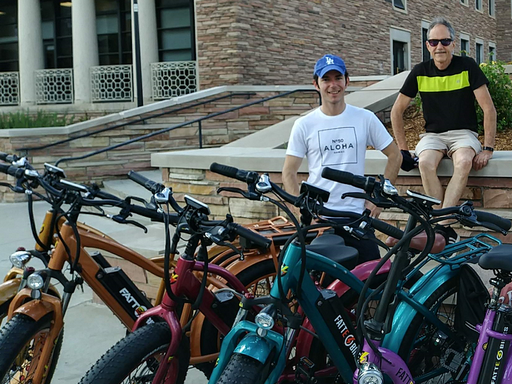 Father and son reunion on E-bikes!
New companies for new modes of transportation. Like to bike, but don't want to arrive sweaty to work? Here's one answer. Charge the battery with a solar panel and suddenly you're in our PV-EV club, even in an apartment situation! 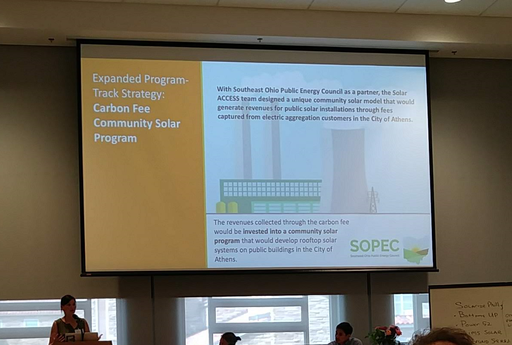 Ohio going Solar
The city of Athens, Ohio, explains its electric aggregation model. Community Solar on a municipal scale. Albuquerque next? PNM still delivers, but WE choose the source. 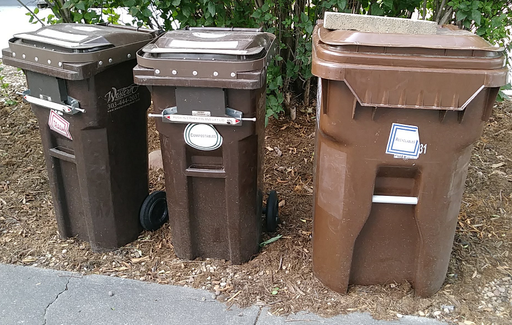 We're NOT Just Solar
Even the city is on board. Notice that the smallest container on the left is for trash! We can minimize our diesel truck use by only picking up trash one week and recycling the next. A new company can handle the compost. Electric truck?!! 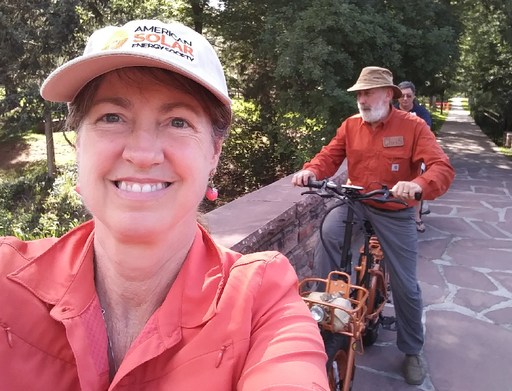 Biker Momma Athena
And we have an Albuquerque company selling similar e-bikes for us to purchase. More options all the time. 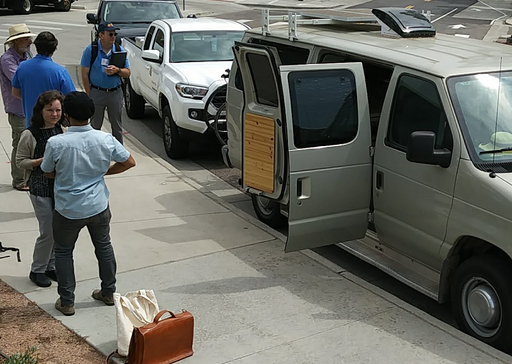 Ubiquitous Solar
It's on top of the van and used to power small appliances inside. The real value, though, lies with the owners. They have a virtual reality film to promote a solar lighting solution for third world situations...hmm, I bet we have some here in NM who might like their solution. 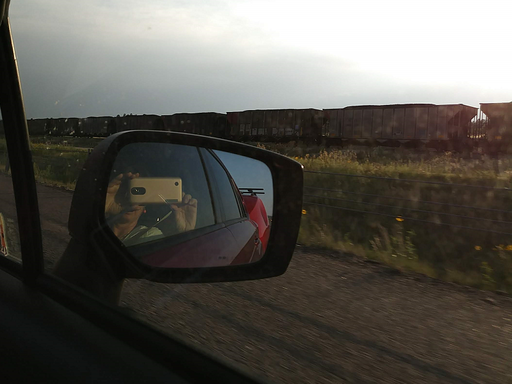 Goodbye coal
Observed on the way home. Those coal trains might very well be on their last journey. Hello blue skies! 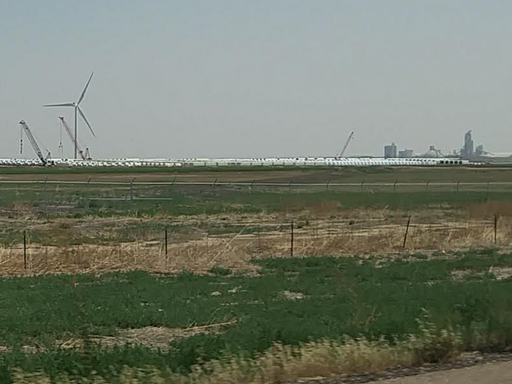 Windswept and Sunny days ahead
Observed on the way up to Boulder. You're looking at a coal plant destined for recycling (we hope). It's being replaced by hundreds of wind turbines (one erected and parts laid out) and solar (not pictured). I can't wait to see the CLEAR blue skies!