Solar Thermal has been around since the beginning. The term just refers to the sun’s light energy being converted to heat. Many times it is specifically referring to heating water, but the broader application would include passive heating with Trombe walls and south facing windows, cooking and active systems used to heat water or air, but include a pump or fan…thus active system.

Here are a few uses and documents you can use for reference. 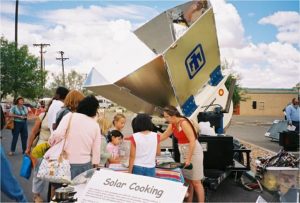 Here is an example of Solar Thermal used for cooking. Just think…the green house effect is scientifically the same as a solar oven. It’s just a different temperature range.