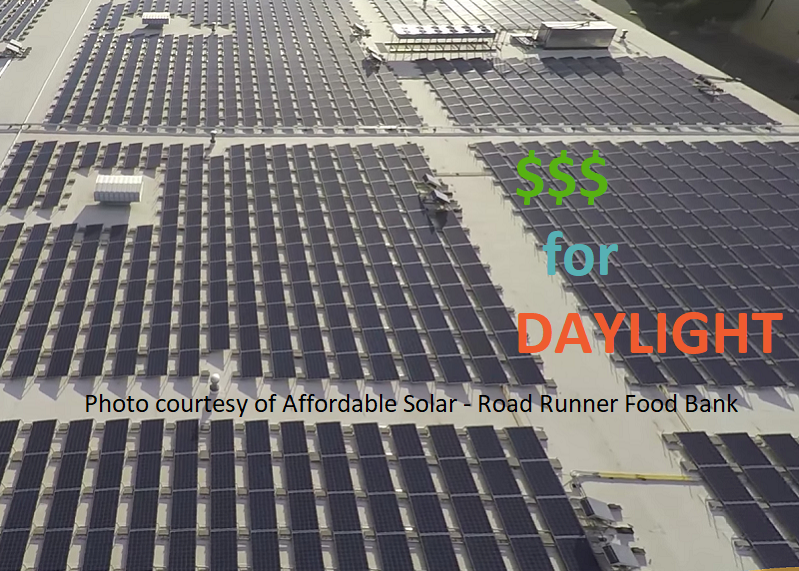 Whoever said there are few investment opportunities in New Mexico hasn’t looked to their roof lately. We interviewed Trishelle Kirk at Affordable Solar and she alerted us to this amazing opportunity that many of you commercial real estate owners have ignored.

So, Trishelle, how can this rate of return be possible?

Commercial solar has similar financial benefits to residential solar, plus some. A business or a building owner has access to the same 30% federal tax credit as homeowners, but they also can depreciate 85% of the value of the system in year one (2018). This bonus depreciation could become a 20-30% additional tax benefit in the first year. For most business owners, the out-of-pocket expense for a commercial system is less than half of the original cost of the system after year one. They can use solar to significantly reduce tax liability, pay a reduced cost for a major property improvement, and reduce electric bills.

Depending on their utility rate schedule, they will achieve maximum financial benefit from either a pure solar project or a solar + storage project. Experienced solar installers can typically help good commercial solar candidates achieve an IRR of between 10-20%.

I heard the solar industry is growing by leaps and bounds, though.

Yes, it is. In fact, the largest utility in New Mexico, PNM, interconnected 3,500 solar arrays in 2017, but only 26 of those solar arrays were for commercial customers. While the residential market in our state has nearly tripled over the last 3 years, the commercial market remains relatively small.

Why the difference between residential and commercial numbers?

For several reasons, most obvious being the difference in market size. However, the other main differentiator is that the benefits of putting a solar array on your home are straightforward and relatively well known. Most homeowners can finance their new solar array and pay less for their solar loan than their prior electric bill. Once the loan is repaid, they have free solar energy powering their homes. Finally, the decision makers usually live under the same roof.

Commercial real estate is more complicated. The ownership structure of the company, the decision-making process for an organization and the considerations for a non-owner occupied property has resulted in fewer commercial solar transactions. Business owners are constantly assailed by the challenges of running a business and often put property investments on the backburner. However, the benefits of commercial solar are worth taking the time to consider, especially because of the bonus depreciation available in 2018.

Yes! It takes months to put together some of these deals and engineer the project.

Who else has benefitted from “commercial solar?”

Non-profits! Saving on operational costs means more money toward their programs and mission. For example, Affordable Solar and Roadrunner Food Bank partnered together to put a solar + storage system on the food bank’s Albuquerque facility, at no cost to the food bank. They serve about 70,000 New Mexicans a week and were paying over $180,000 a year for electricity. The system now lowers their bill by $30,000 a year. For Roadrunner Food Bank, that means they are able to provide an additional 150,000 meals for hungry families a year.

Wow! The chance for a good business investment or community investment lies above our heads, then. Any last comment?

With the best solar resource in the country, favorable solar policy, low interest rates, and an experienced contractor to help commercial real estate owners take advantage of all the available financial incentives, the opportunity has never been better to make an investment in solar for your commercial property…especially here in New Mexico.

Thank you, Trishelle. It is no wonder Affordable Solar is one of the largest solar companies in the state and a national player.

As with any investment involving taxes, please consult your tax professional. Also, New Mexico is fortunate to be home to several reputable commercial installers, so always seek proposals from several of those companies (energysage). The state has had an influx of not so honest or competent installers so make sure to ask the right questions. NMSEA wants you to be happy with your choice and often includes information on solar installation in their speaker series. Check out the latest presentation from 2017: What to Expect from Your Solar Installer and the 2018 Facebook video.